There is always hope, can you see it? ~ when all seems like it’s spinning out of control, explosions, pandemic, fake news, poverty, corruption,… and the list goes on; there is always a small bright light that keeps us going. I call it hope. I trust in humanity, in the future, in the goodness of people, because to simply put it: ‘all the concentrated darkness of the world cannot out out the light of one single candle’. We live in a planet of duality. Where there is dark, there is also light, with the bad comes the good and from death life rises like a phoenix. I am so grateful and overwhelmed by the generosity and kindness of people from all over the world who are responding to the tragedy in #beirut and the #Beirutexplosion. Your donations, your kind wishes, your shares and your humanity fuels the hope and spirit of the young generation who will save #Lebanon from its seeming hopelessness. A better future will prevail. If you still wish to donate to benefit the Lebanese families please do so via trusted NGOs like @sealforlebanon and @impact.lebanon to ensure that it does not end up in the pockets of the corrupt politicians. Thank you all

Dear friends, as a result of the tragic blast that has crippled my country #Lebanon and my city #Beirut and its beautiful resilient and life loving people, urgent help is needed. I am deeply saddened and pained by the lost lives, injuries and resulting destruction and homelessness of my people. For that reason I have investigated a safe way to help, no donation is too small and every little bit can go to feed a hungry person or to shelter those without a home. I am offering a free print (from attached 7 images taken in Lebanon) to anyone who donates to @sealforlebanon (Beirut emergency fund 2020) any amount over 50 dollars. Please send me your receipt of donation , your address and chosen image and I will mail you a signed print and my sincere thanks and gratitude. You can find the donation link on the profile of @sealforlebanon . Thank you in advance and let’s stand together as a human family at this time. https://www.facebook.com/SEALforLebanonhttps://seal-usa.org/beirutemergencyfund/

The way to explore slowly

Life is slow in Yunnan. People walk with no rush; the fields can wait. The clouds change form in slow motion; the lush mountains are great company. Even the birds chirp melodically and without strain; it’s just the way it is. In a place like that, a bicycle fits so well for exploring at the speed of the land. I came upon a child and his grandfather walking with their shadows along the rice fields and enjoying the caressing rays of the gentle sun. I got off my bicycle and began photographing them after getting their clear unspoken agreement. Then I saw alarm in their eyes as they gestured towards me; I turned around and watched my bicycle tumble with my second camera and my bag into the rice field. This man with grace, ease and a smile, put his grandson down, helped me lift my now damaged mode of transportation, with its dislocated wheel. He gestured to me and we communicated with my limited Mandarin as he helped carry my bicycle back the other way towards his home, his little grandson following us shyly. The man asked me to wait as he brought out his toolbox and slowly and methodically fixed the wheel and tested it. He smiled and his granddaughter joined them as they posed for a last photograph before I took off feeling lighter, happier, and grateful for the good people who give without counting the cost, who help because it is human to do so.

warmed by the sun and a grandparent 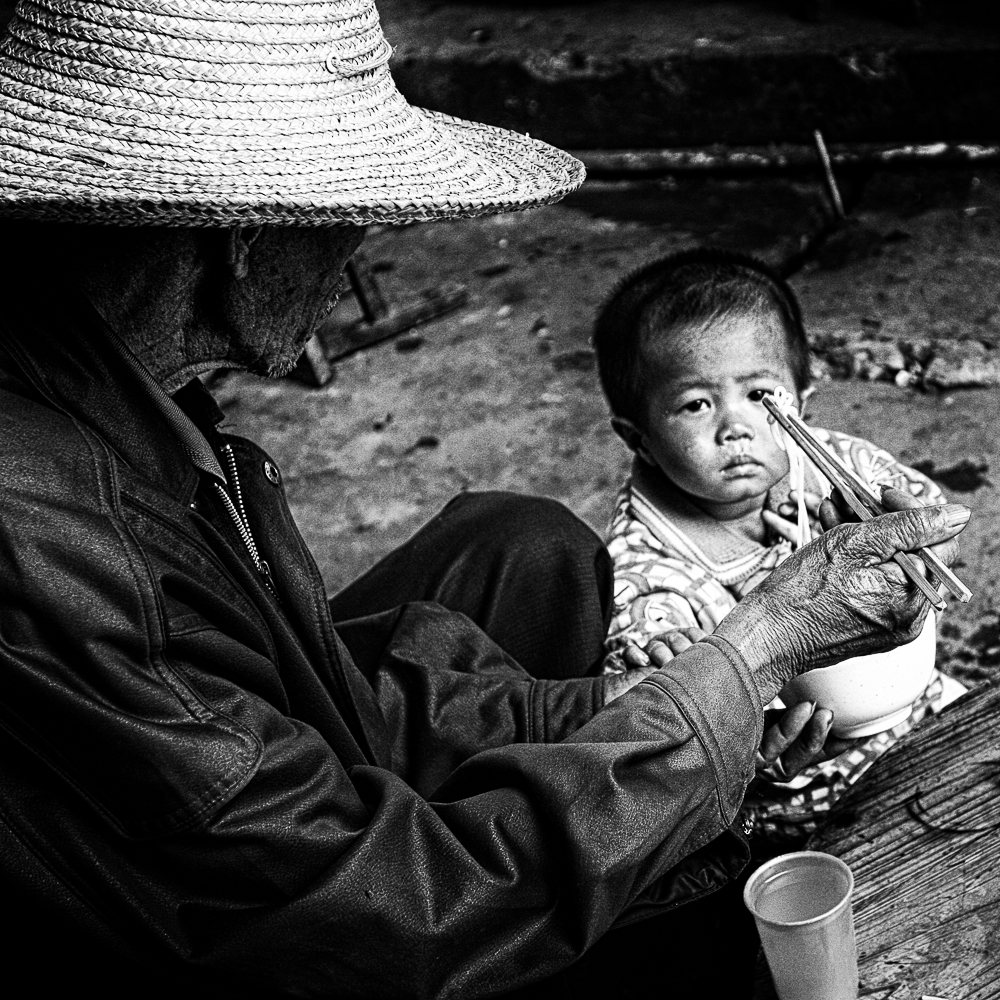 The grander love of grandparents

It is so endearing in Asia to see how grandparents create a living womb for their grandchildren and how they care for them tirelessly, carrying them on their old backs, feeding them, singing hymns to them, and carrying them into adulthood on a fluffy cloud of love.

How strengthening it must be for the children and how infusing with confidence. 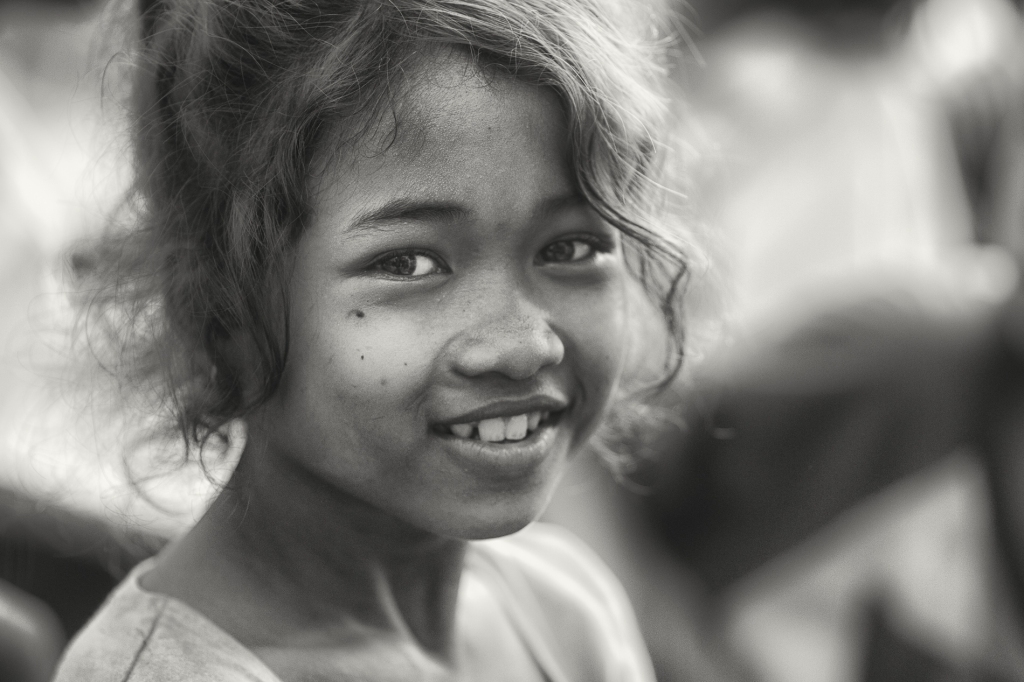 Every single place I have been to around the world has shown me that the local people are the tarot of that place. They are the ones who process its energies, who live with the angels of that land and who give expression to its unseen worlds.

Whatever mystery and beauty radiates out of Cambodia is clearly seen twinkling in the eyes of its people, especially the children. It is their warm smiles that stay with you and make you dream of going back. Yes, it is a beauty that goes much beyond the physical surface, and their bright eyes are just gateways to a whole other world awaiting to be discovered.

photo taken: girl at the CCPP center in Sihanoukville, a fantastic project aiding Cambodian children to make a future through art. I encourage you to explore their website and their inspiring work. I will be posting quite a few photos from there this month.

The hope that never dies

If I were to put one common word when describing children from any country, I would say ‘resilience’…

Children are developing beings, changing at a rapid speed, growing, absorbing, evolving and filled with energy that drives them through their process of becoming young adults. What I saw in a lot of the children in Congo was hope, strength, power, joy and possibility despite of and against all odds.

At the beginning of their life journey, their future is unpredictable, unknown and allowing for just anything to happen. It makes me wonder what will become of the these young bright faces that I met, where they are now and where they would be years from now.

photo taken: during a french lesson at the Cajed center for the care of ‘les enfants de la rue’ (the street children) in Kinshasa.